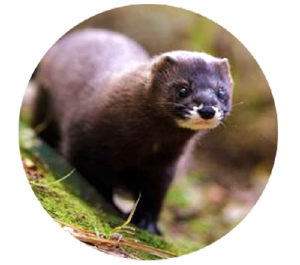 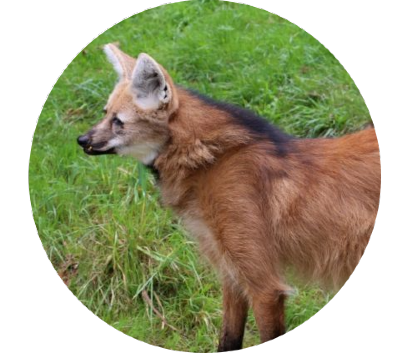 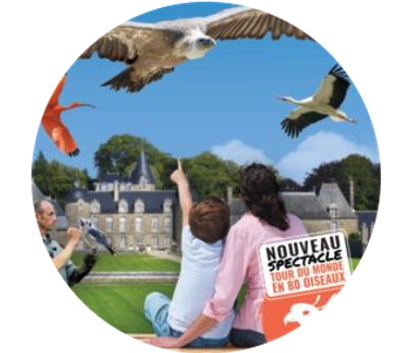 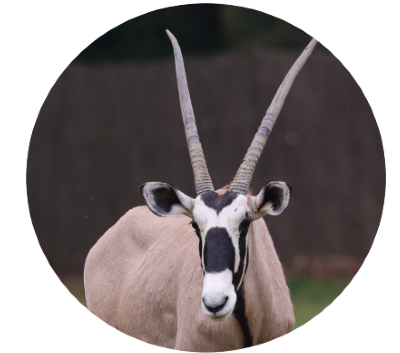 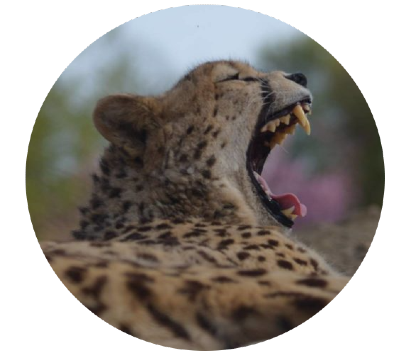 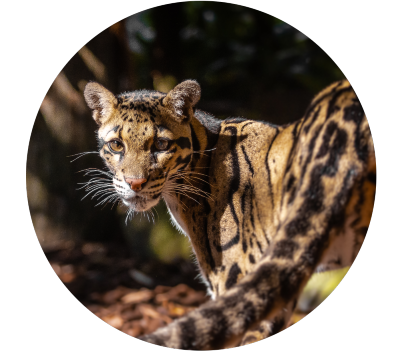 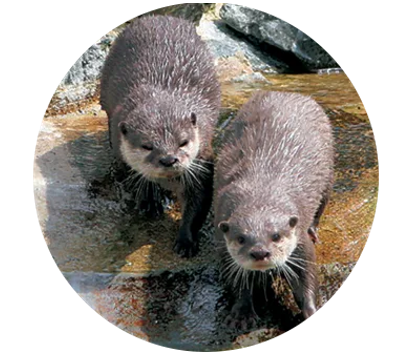 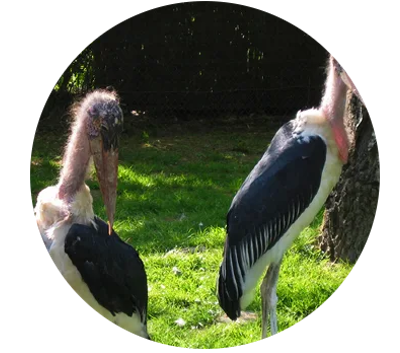 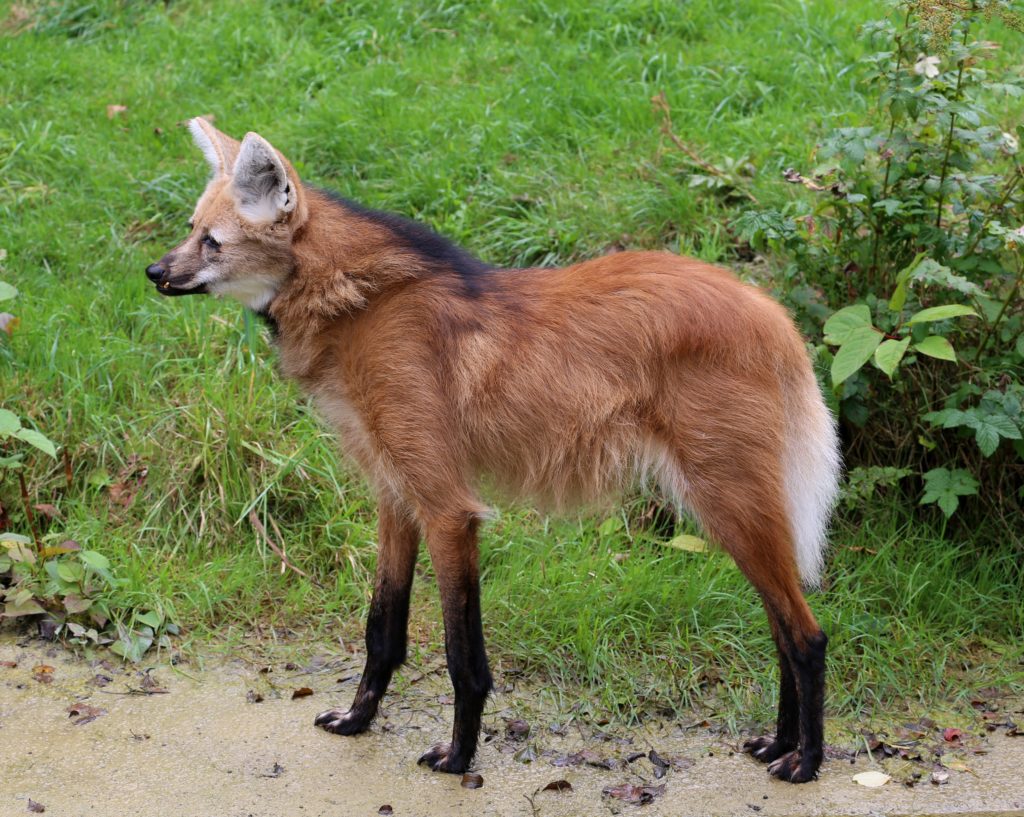 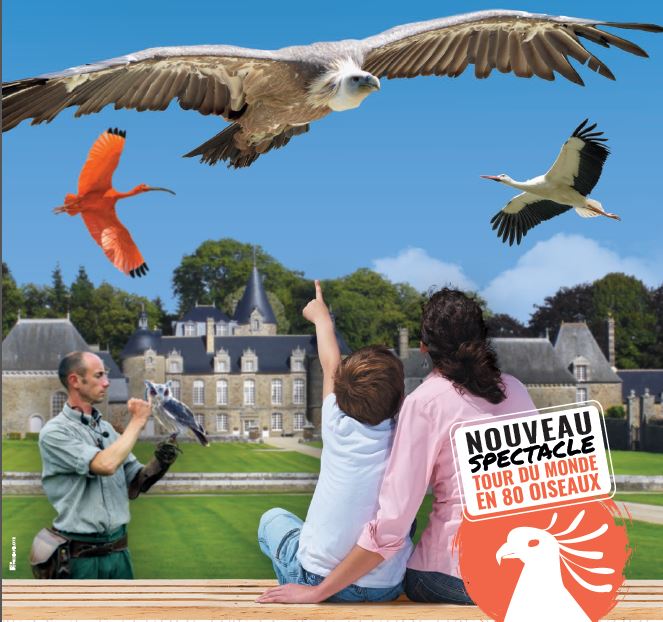 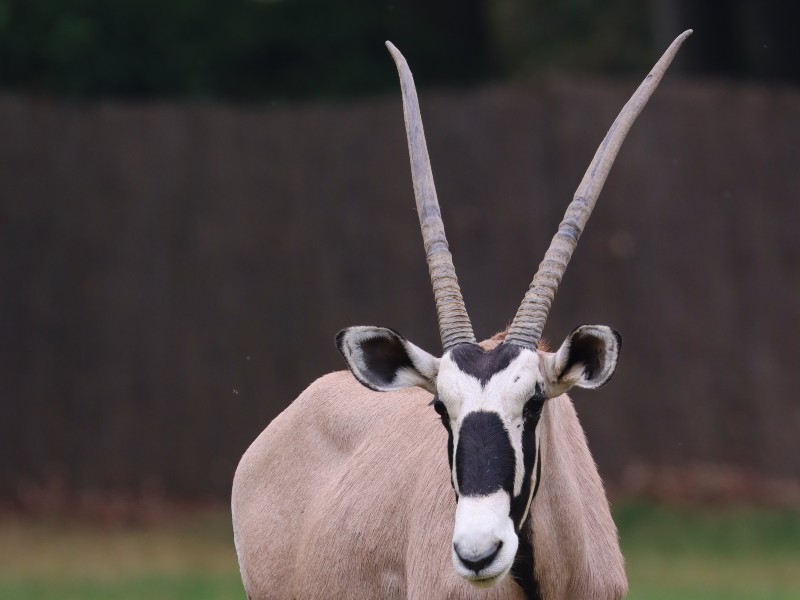 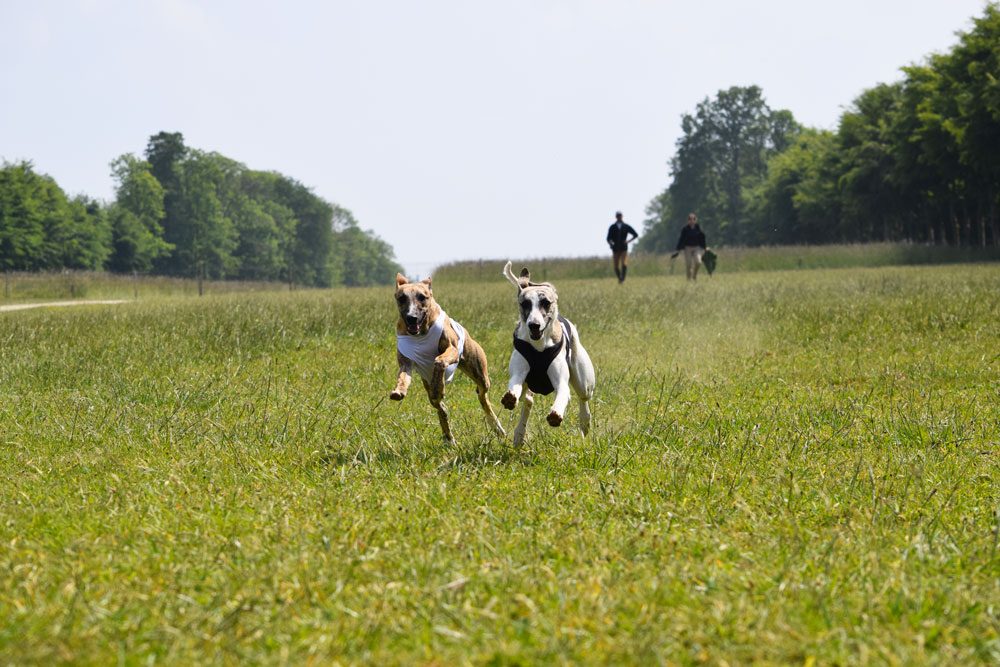 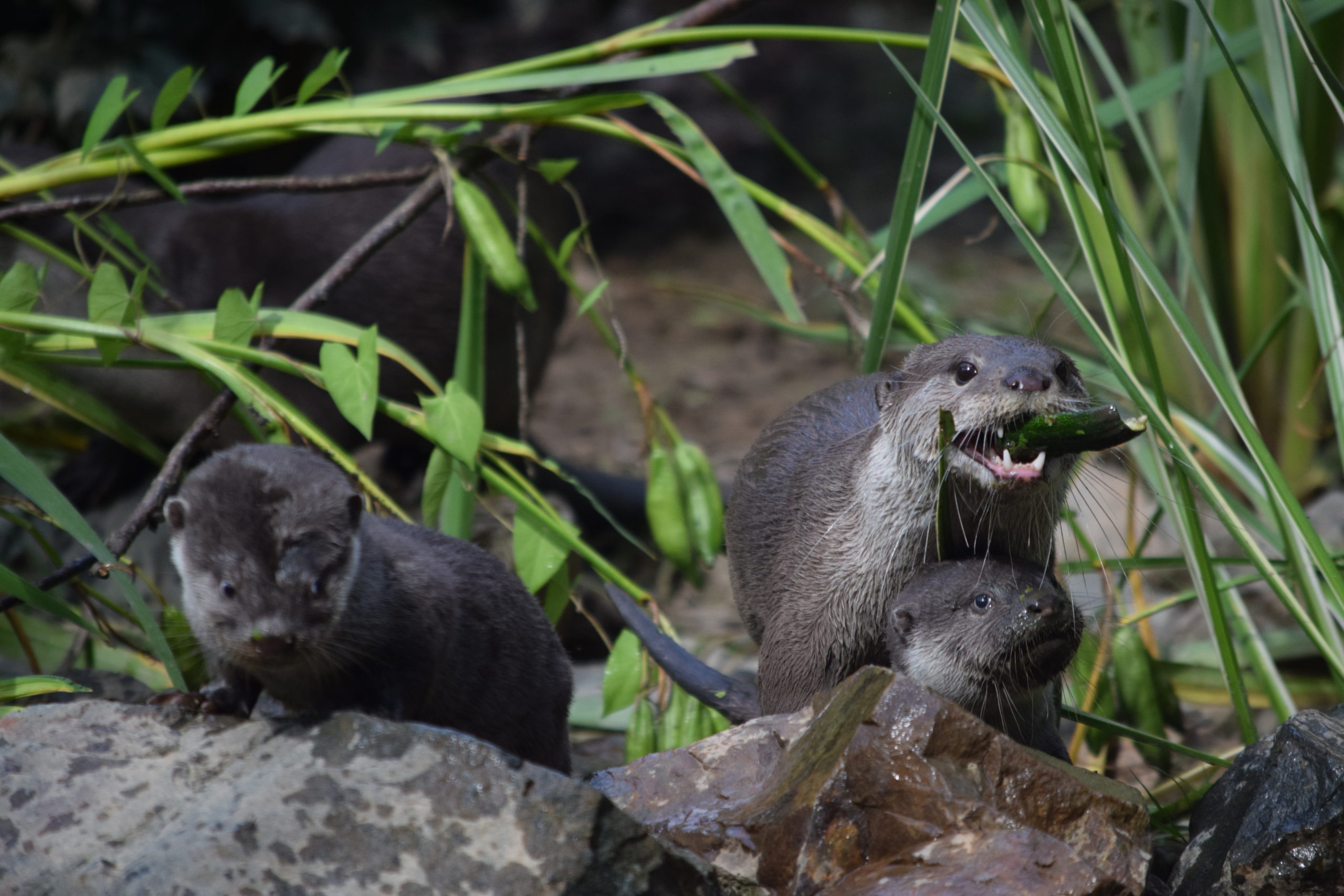 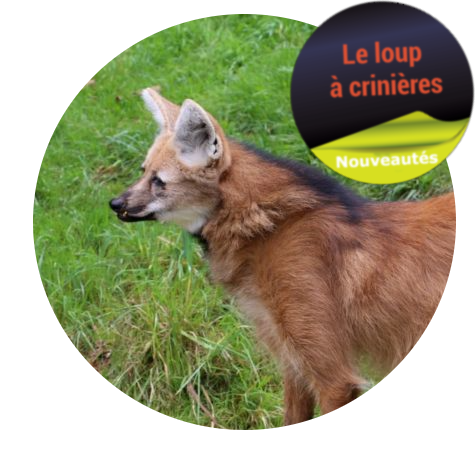 The Pampas of the Maned Wolves

The role of modern zoological parks is evolving in order to better accomplish the fundamental missions of education, conservation, research and therefore the safeguarding of biodiversity. The zoological garden of La Bourbansais, part of the EAZA, wishes to participate fully in this necessary mission of safeguarding endangered species, and thus wishes to privilege and direct its means and efforts particularly towards the EEP (European Breeding Programs). This is why our pack of European wolves (Canis lupus) has been placed in a suitable refuge, and will therefore be able, after having completely renovated their environment, to welcome an endangered wolf species into its habitat. origin (South America), a pair of “Maned Wolves” (Chrysocyon brachyurus). The in situ population, classified as Near Threatened in the wild by the IUCN, is now under surveillance. Deforestation, its felling to protect the herds (wrongly since it is unable to hunt prey weighing more than 10 kg) are all threats to its future… The maned wolf is a very curious animal, larger than a wolf; it is the only large canine in South America and moreover the largest in the world, with an elegant slender silhouette and the finesse of its features…and a beautiful red color. The species is part of an EEP conservation program to which we wish to contribute. Composed of 130 individuals distributed in 61 European zoos, births are rare and the coordinator of the species (Leipzig Zoo in Germany) relies on our expertise and the experience of our zoological team to participate in this ex situ conservation program. and thus train and welcome a new couple to start a family and establish a family. 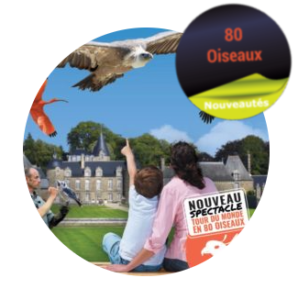 Around the world in 80 birds

On a totally new stage, admire the birds of the 5 continents up close! Birds of prey (hawks, eagles) are in the spotlight and leave the sky free to the splendid aerial ballets of storks from Europe and other waders from Africa and America. 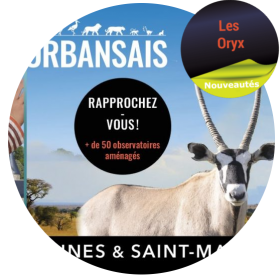 It is an endangered species in its natural environment; thus represents the 15th species subject to a Bourbansais BSE (Studbook) which thus fully fulfills its mission of species conservation. Oryx are found in the desert dunes of Namibia to the arid savannahs of the Kalahari. The oryx has large black lines on its sides and legs and its pale head, this one appearing to be made up. The internal temperature of the oryx gazelle can reach 45°C. However, he has a thermoregulation system allowing him to keep his facial temperature at 38°C if necessary. Instead of wasting his body’s water on sweating and gasping, he lets his body temperature rise a few degrees above normal when it’s really hot. At night, it rejects the accumulated heat. He is the very archetype of the animal that has adapted to the desert.

The fastest land animal in the world: The Cheetah

In a brand new enclosure specially designed for this spectacular feline (Acinonyx jubatus), he is the fastest quadruped in the world, making more than 4 strides of 8 meters per second, or 110 km/h…. This is the 17th EEP (European Breeding Program) in which La Bourbansais participates, thus fully fulfilling the eminently important role of modern zoos, for the conservation of endangered species in their native environment. It is an endangered animal, classified as “vulnerable” by the IUCN (International Union for Conservation of Nature).

This involves the development of a vast 2-hectare fir forest in the zoological park, allowing on the one hand a pleasant shaded walk in a forest environment, but also on the other hand allowing intrepid little explorers to discover, a fun-educational route, dotted with many silhouettes of animals (deer, boar, bear, badger, squirrel, toad, weasel, owl, etc.) from our European forests which should be discovered while having fun with obstacle course and agility games…

Our NEW animation, Unique in France: “Dogs and Men”

In the gardens of the Carrousel, for 30 minutes you will discover in different facets the oldest friend of Man: the Dog, which we have been seeing for more than 30,000 years, and in particular: – the exceptional sheepdogs, the “border collies”, who will show you their remarkable efficiency in directing and developing a herd of sheep before your eyes… thus recalling in particular transhumance and the magnificent ancestral work of the shepherds… – the spectacular greyhound races, which can reach top speeds of 75 km/h, the fastest domestic animal in the world – without forgetting the traditional Fauve de Bretagne and French-tricolor pack dogs, and their legendary obedience alongside the horses…

The Night of the Predators

The night of the predators is a night visit of part of the ZOO of La Bourbansais, with an animal guide who takes you to discover predators: Lions, Tigers, Wolves, Lynx, Cheetahs, Panthers… (species given as an indication ) As night falls these predators become more active and therefore more attractive; this is the perfect time to discreetly observe them in their world at their peak of activity.

The Princesses of Siam!

Clouded leopards (Neofelis nebulosa) or long-banded panthers… But also: Otocyons (Otocyon megalotis) or Bat-eared Foxes, also called Eared Dogs belong to the Canidae family and live mainly in Southern Africa. Little presented in zoos, its conservation status by the IUCN (International Union for the Conservation of Nature) is “minor concern”…

Come and discover in a new, beautifully vegetated environment, the cohabitation of our new residents a couple of Smooth-coated Otters (Lutrogale perspicillata), or Indian Otters, with our spectacular White-handed Gibbons.

The aviary of the Marabouts of Africa

Leptoptilos crumeniferus These old “bald gentlemen” with a somewhat ungrateful physique are in fact very large storks with a featherless neck and a prominent pouch. Tall (1.5m high and 3m wide), slender, it also has a long, powerful beak and excellent vision. Scavengers, they help clean up and thus limit the spread of disease. to their “cleaning” work that the ecological balance of the savannah is preserved!

Guided and free visit of the Vegetable Garden

The giant anteater or anteater

At the beginning of 2014: arrival of “Hector” from Dortmund Zoological Park, who will come to keep our female “Japura” company… in order to start a big family… we hope so! The Giant Anteater (Myrmecophaga tridactyla), also called Anteater, lives in the South American pampas. This imposing animal (measuring 1.80 m in length with the tail, and 60 cm high) is solitary. It tirelessly roams the meadows in search of termite mounds which it destroys with its powerful paws; it then collects the termites with its long sticky tongue…

Take a walk on their territory! Madagascar?…

Wooded area of 4000 m² bordered by a pretty stream allowing an unprecedented approach and observation of 3 species of lemurs. The surface and the richness of the territory guarantee the well-being of the animals and offer the visitor an unforgettable proximity to this emblematic animal of Madagascar.

Admire one of the largest birds in Europe, and attend La curée des vultures

The griffon vulture is one of the largest diurnal raptors with a wingspan of 2.5 m and a weight of 7 to 11 kg! , Necrophagous, that is to say feeding on dead animals, it is nevertheless a splendid animal sporting a tawny plumage on the belly and the chest, the back being rather buff. 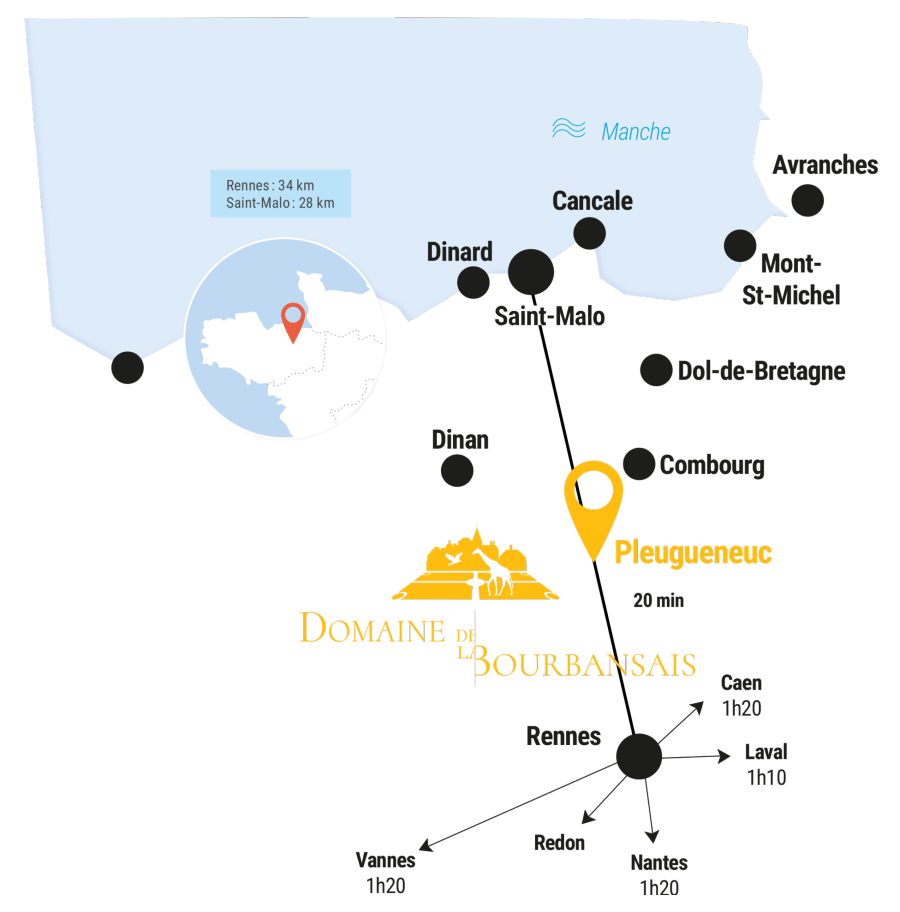 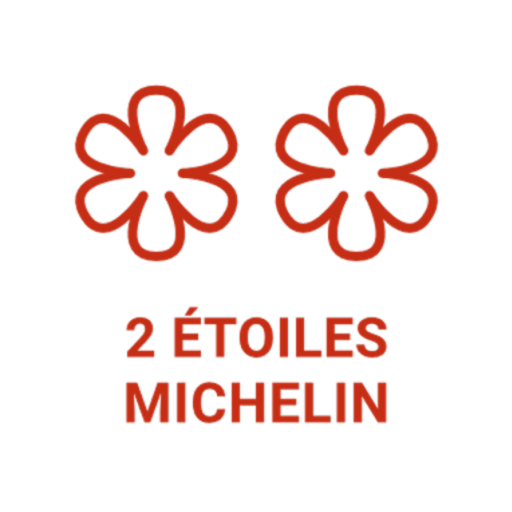 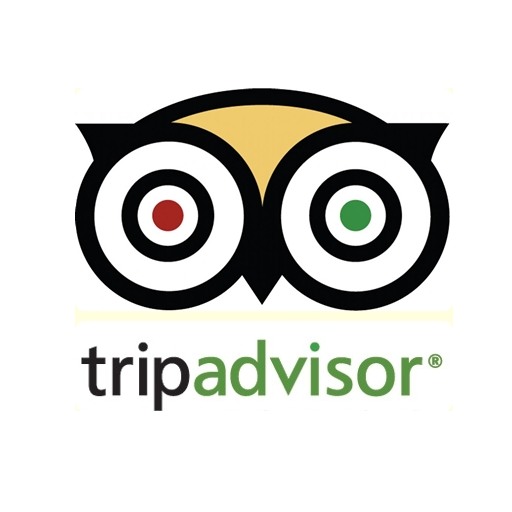